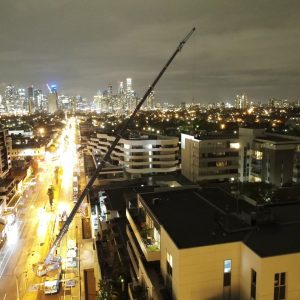 While the headlines are saying that Bay Street in Port Melbourne was closed for the Hollywood filming of US sinkhole TV show, word on the street is that it was actually closed due to an installation of a 99.9 kW SmartConsult rooftop solar photovoltaic system.

While we don’t want to steal the limelight, it was SmartConsult who pipped them to the post, completing our own works of art with solar panels taking the leading role. The solar PV panels were for Bay View Apartments, a high rise in Bay Street, Port Melbourne.

The project had to be completed at night prior to filming and we got a shot of a crane lift during the night time works on the weekend. It’s not every day you stop a Hollywood film production but in the name of a renewable future it was worth it. We needed to install a solar system and they needed to shoot US TV drama called La Brea – which is more important? The SmartConsult team were able to negotiate and collaborate with the Hollywood producers to come to an amicable agreement so we could both get the jobs done without any interference.

The busy Port Melbourne street is only open for foot traffic and it will be closed for three days. The La Brea production will see Melbourne double for LA. It will be about a family’s survival after they are separated by a huge sinkhole that mysteriously opens in the city.

We believe the sun is the real shining star in this scenario. Deciding to switch to solar helps significantly reduce energy costs for businesses like Bay View Apartments. A real return on investment is evident within a few years. It’s better for businesses to be more cash flow positive and it’s better for the environment instead of fossil fuels.

At SmartConsult, we have been busy completing commercial solar installations for a selection of commercial and industrial applications. Applications include a commercial kitchen, construction companies, and companies within the food industry. In the last month we have installed 550kW of commercial solar and we have quoted another 3MW this year. To read more click here.