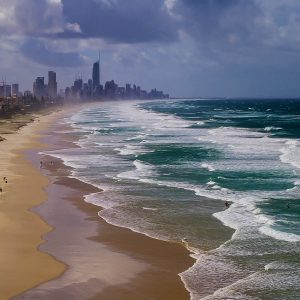 How green is the Gold Coast and how far is our city on the path towards net zero? Furthermore, is the Australian Government taking steps in the right direction and how do we compare to other countries?

While we have seen industry giants like BHP, Woodside, BlueScope Steel, BP Australia, Orica, APA Group, AGIG and Wesfarmers Chemicals, Energy and Fertilisers, National Australia Bank, Schneider Electric and Australian Super all taking the pledge to be the change makers achieving net zero by 2020, is the message being communicating clearly enough to businesses and councils?

This week CSIRO has announced they are launching into wide ranging research and development collaborations with governments, other research institutions and universities aimed at preparing for and addressing issues including future pandemics, climate change, droughts, floods and bushfires, antibiotic resistance and safeguarding the health of water resources.

CSIRO released its report into Australia’s climate and disaster resilience last week, which was requested by Prime Minister Scott Morrison who in January called on the agency to make recommendations for “practical resilience measures”.

The report said climate change is increasing the frequency and severity of bush fires, and the interplay of multiple risk factors makes prediction and management a “complex undertaking”. To read more about the mission click here.

While we can see some evident steps are being made towards net zero, what we do not yet have is a clear plan from the Australian Government or proper plans by local councils, suggesting there is room for improvement.

One good thing we do have in place is the Net Zero Momentum Tracker. This monitors Australia’s progress towards net zero emissions across key sectors of the economy and it assesses business and government momentum towards net zero emissions across Australia. For example, to see how the Gold Coast Council is tracking we can access the tracker. It currently tells us the Gold Coast City Council does not yet have a net zero ambition but there has been some activity to reduce emissions. Lets hope Gold Coast Mayor Tom Tate takes action and we move further along the path in the coming months. To see how other councils and Australian business are tracking click here.

It has been a year since the British parliament declared a climate emergency, a potential new proposed bill would substantially accelerate the speed in which the UK has to act. If the bill is passed the Government would have to create a plan to completely reduce its carbon emissions in real terms with immediate effect. They have to calculate the entire carbon footprint of the UK, including emissions caused internationally through import and export; actively conserve and restore nature here in the UK with focus both on biodiversity and soils’ protection and produce ways to evaluate how effectively this action is implemented; Actively mitigate the damage to nature along the UK’s supply chains – both in the UK and internationally.

The bill calls for accountability on the impact on the natural world as a consequence of our consumption; Reduce reliance on speculative future carbon capture technologies, and to actively restore natural carbon sinks, such as the conservation of woodlands, and restoring peat bogs and the overall vital function of soils that act as a natural reservoir for carbon and keeping it out of the atmosphere; And create a “Citizens Assembly” so the people can have a real say in the way forward, bringing social equity into decision making.

Aside from the benefits to the environment, being carbon neutral saves a lot of money on energy and these funds can then be spent elsewhere. For an energy assessment click here to contact us.